You are here:
NF StoriesResearch 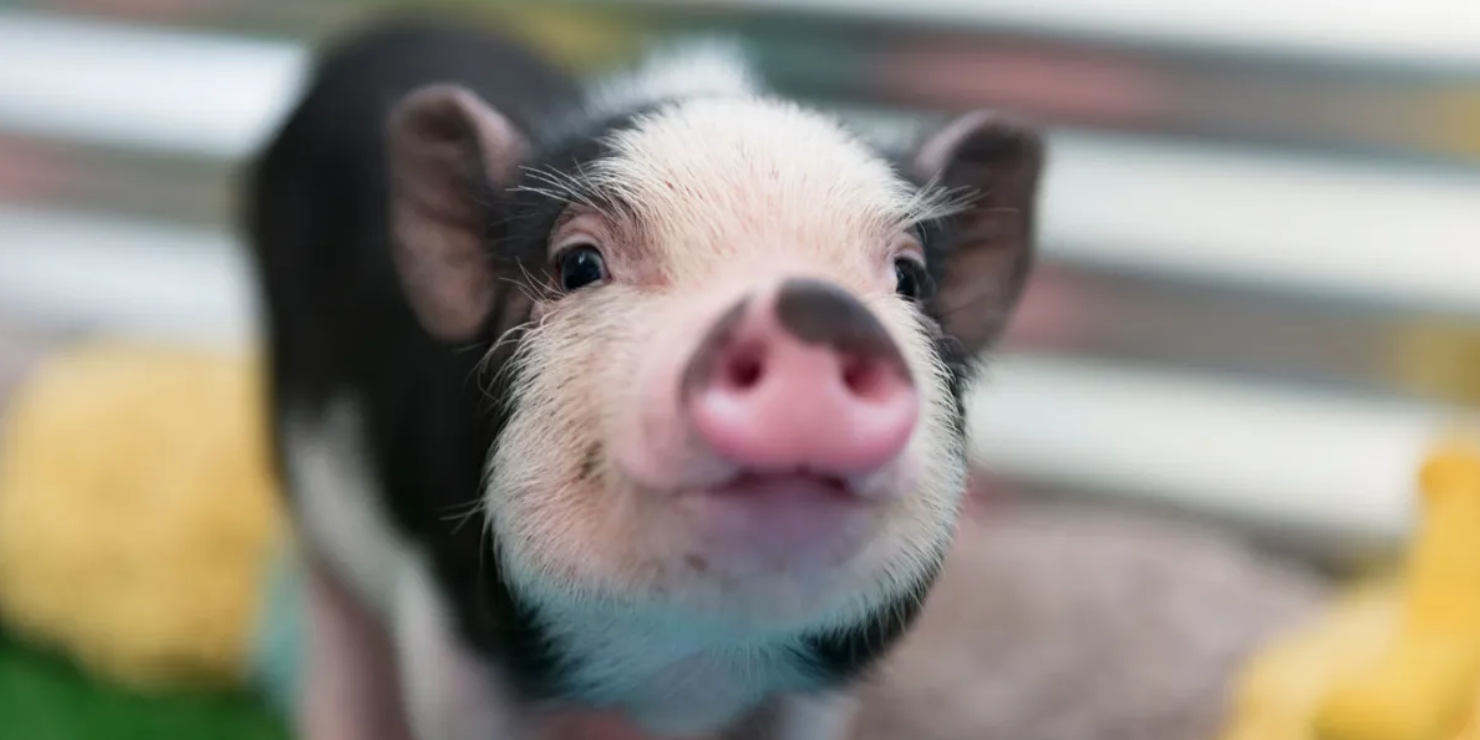 A team of scientists wants to accelerate research into a genetic disorder by using CRISPR to copy unique mutations from affected children into pigs. Originally posted in The Atlantic Ed Yong Dec 13, 2017

When Charles Konsitzke and Dhanu Shanmuganayagam first met, they were both just trying to get some peace and quiet. It was early 2014, and they were representing the University of Wisconsin-Madison at a fancy event to promote the university’s research to local politicians. After hours of talking to senators, Shanmuganayagam was fried, and went for a walk to clear his head. That’s when he bumped into Konsitzke, an administrator at the University of Wisconsin’s Biotechnology Center. They introduced themselves, and discussed their work. Shanmuganayagam said that he ran a facility that rears miniature pigs, which are genetically engineered to carry mutations found in human genetic disorders. Scientists can study the mini-pigs to better understand those diseases.

“And I said: I have a project for you,” Konsitzke recalls.

Konsitzke’s son Mason, now aged 7, was born with little brown birthmarks on his buttocks. Many kids have one or two of these café-au-lait spots and at first, Konsitzke thought they were cute. But after more appeared, he did some research and found that such spots are a common symptom of neurofibromatosis type 1 (NF-1)—an incurable inherited disease. Around Mason’s first birthday, a pediatrician confirmed the diagnosis.

NF-1 is an incredibly varied disease with many possible symptoms. The spots are the least of them. Some patients, Mason included, develop learning disabilities. Others develop bone and heart problems. Most commonly, patients get tumors on their skin and nerves; Mason already has one on the side of his face. These tumors are usually benign, but even so they can still disfigure. “It continues to grow, and if it runs out of space, it will deform his face outward,” says Konsitzke.

Konsitzke isn’t a scientist by training, but through his job he’s well connected to the scientific world. Once Mason’s diagnosis was in, he started asking around about NF-1 research. In particular, he wanted to know where the bottlenecks are. What was the single thing he could do that would most accelerate research into his son’s condition? And the answer that he kept hearing was: Find better animals to experiment on.

When studying diseases, scientists often turn to laboratory animals like mice and zebrafish. They can use these so-called model organisms to work out how mutations cause diseases, and to find and test possible treatments. But the usual lab animals aren’t a good fit for NF-1. They’re too small, and they don’t react in the same way to the mutations that cause the disease in humans. For example, studies in mice suggested that a drug called lovastatin might help to address the learning and attentional problems that accompany NF-1. But when the drug was tested on actual children, in a large clinical trial, it did nothing.

To better understand NF-1, Konsitzke learned, you need a species that’s closer in both size and biology to a person, and yet is still relatively easy to raise and study. That is, you need pigs. “Pigs closely represent humans,” says Neha Patel, who directs the UW neurofibromatosis clinic. “People with NF-1 have varied cognitive deficits, from severe learning issues to subtle problems. If you imagine studying those in a rat, you’d only get a crude picture of how that translates to humans. But pigs are intellectual animals.”

That’s why, in a quiet corner of the Wisconsin State Capitol, Konsitzke was so excited to meet Shanmuganayagam. Here was someone with experience in raising, engineering, and studying pigs. Here was just the guy he needed to give NF-1 research a boost.

For his part, Shanmuganayagam was keen to take on a new challenge. “I know a lot of diseases,” he says, “but when Chuck told me [about NF-1], I thought, ‘I don’t know what this is.’ And I can’t believe I didn’t know because it’s not that rare.” Indeed, NF-1 affects at least one in every 2,500 babies, making it more common than other better-known genetic disorders like cystic fibrosis. And that figure is probably an underestimate, because many cases don’t present with obvious symptoms. “It’s under-recognized, and kids are not getting the best care,” says Patel. She’ll often see parents whose children clearly meet all the clinical criteria for the disease, and yet hadn’t been diagnosed for over a decade.

The disease has a low profile partly because its symptoms can be so disfiguring. Patients with NF-1 often “become closeted and sheltered,” says Konsitzke. “People don’t look at them or listen to them, so there’s no strong speaking voice for the disease.” The man whom Pope Francis embraced in 2013, whose face was covered in growths, had NF-1. Joseph Merrick, the so-called Elephant Man of 19th-century England, was once suspected of having had NF-1. “Our neuro-oncologist told us to take pictures of Mason now, and be prepared for his face to change,” says Konsitzke.

For different reasons, NF-1 has a low profile in the scientific community, too. It’s caused by mutations in a gene called neurofibromin 1 (confusingly also shortened to NF1), which is daunting to study because of its large size and unusual variability. “People fear it in the research realm,” says Konsitzke. There are more than 4,000 variants of the gene, each of which changes the symptoms of NF-1 in subtle ways.

Again, the pigs can help. Konsitzke and Shanmuganayagam aren’t just planning to develop pigs that can model the symptoms of NF-1. They want to use the revolutionary gene-editing technique known as CRISPR to create pigs that have the specific mutations of a particular individual. Each child with NF-1 would get their own personalized piglet, whose version of the NF1 gene matched their own. The piggy proxy could be monitored to see how the kid’s condition might progress, especially since they mature faster than humans do.

The pigs could also be used to test possible treatments. At the moment, people with NF-1 “are their own guinea pigs,” says Konsitze. “It takes years of tests and side effects to find something that works. My son is on a cocktail of four different meds.” Having an animal that mirrors the particulars of a person’s condition might make it quicker to narrow down the best treatments. And Konsitze argues that this should save enough money to compensate for the costs of creating a customized pig.

Shanmuganayagam and his colleagues started actively trying to make the gene-edited pigs in 2014, with a shoestring budget of $50,000 from the Neurofibromatosis Network, which they bolstered through their own fund-raising efforts. (Two companies also developed pig models of NF-1 around the same time: Recombinetics, based in St. Paul, Minnesota; and Exemplar Genetics, in Sioux Center, Iowa.)

Jennifer Meudt, one of Shanmuganayagam’s colleagues, led the work. “Dhanu said: ‘We’re going to gene edit pigs,’” she says. “And I said: Okay, ha ha, how are we going to do this? My background is in botany.”

The easy way to do it would be to buy pig eggs from slaughterhouses, fertilize them in the lab, do any necessary gene editing, and inject them back into sows. But UW’s pig-rearing facility is kept free of disease-causing microbes, so the team can’t just implant their pigs with commercially sourced embryos. Instead, they have to artificially inseminate their own sows, collect the embryos, inject them with CRISPR ingredients, and put them back into other pigs.

The embryos themselves are hard to work with, because they’re not translucent like those of many other animals. “They look like little black balls, which makes it more difficult to inject when you don’t know where you’re poking,” says Meudt. There are logistical complications too. Meudt has to do the CRISPR injections in a building that’s 30 minutes from the pig facility, so the animals have to get shuttled back and forth. From start to finish, the process to make a single embryo starts at 4 in the morning, and ends at around 10 at night. “Those are well-traveled embryos,” Meudt says.

The team delivered their first edited animal in November 2016, which carried a set of NF-1 mutations that had been reported in an earlier published study. They have since engineered three more animals, each with a different cluster of mutations. All of these are essentially personalized—they represent someone’s case of NF-1, but those patients are anonymized.

The next step will be to create pigs that are openly personalized to specific people—and the team is in the midst of getting approval for that. “We slowed ourselves down for some ethical reasons,” says Shanmuganayagam. For example, if a personalized pig starts to show symptoms, and their child counterpart has not, how should the team communicate that information to a family? What happens if the pig dies early? Should a family even get to know which pig is “theirs”? “We’re trying to resolve that,” says Shanmuganayagam. “We might blind ourselves to whose pig is whose with the option of revealing at a later date. I’ve also had my group read Flowers for Algernon.”

Ed Yong is a staff writer at The Atlantic, where he covers science. Twitter Email

Selumetinib granted Orphan Drug Designation by the US FDA for neurofibromatosis type 1
April 22, 2019