Gus and His Make-A-Wish Trip To Hawaii 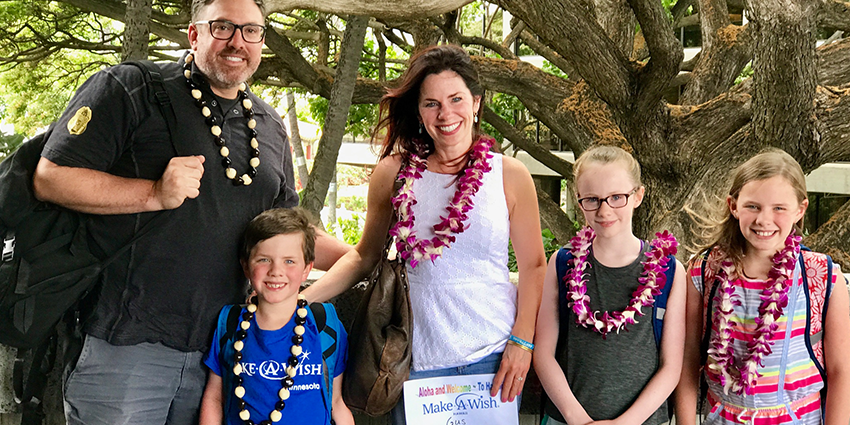 When 3-year-old Gus Erickson was granted a wish by the Make-A-Wish organization, he told his mom and dad he wished for a piece of candy.  Respecting this wish, his parents relayed it to Gus’ Make-A-Wish Minnesota coordinator.  Her response: “Let’s give him some time to think of something bigger—and better—than…candy.”

Gus was born with Neurofibromatosis Type 1.  In the summer of 2015, an MRI revealed a massive tumor in Gus’ brain, requiring immediate surgery.  After he recovered, Gus’ oncologist told his parents that he qualified for Make-A-Wish and they’d be contacted by a representative to start the process.  Gazing through teary eyes at their seemingly good-as-new, happy and healthy little boy, Gregg and Becky Erickson were shocked.  They didn’t want to take advantage of the Make-A-Wish organization when there are so many other deserving children it serves to benefit.  Having just established a new NF Network member organization—NF North Central—in Rochester, MN, Gregg suggested the funds that would be used to grant Gus’ future wish might be put toward NF Network’s advocacy or research efforts, instead.  (After all, his son wanted a piece of candy; Gregg was pretty sure he could scrape together enough cash to grant that particular wish on his own…)  Eleven email messages and seven phone conversations into this discussion later, Gus’ Make-A-Wish coordinator made her message clear: “Gus will get his own wish. He’s earned it.”  And, after the life-threatening ordeal their baby had been through, Gregg and Becky could not disagree. 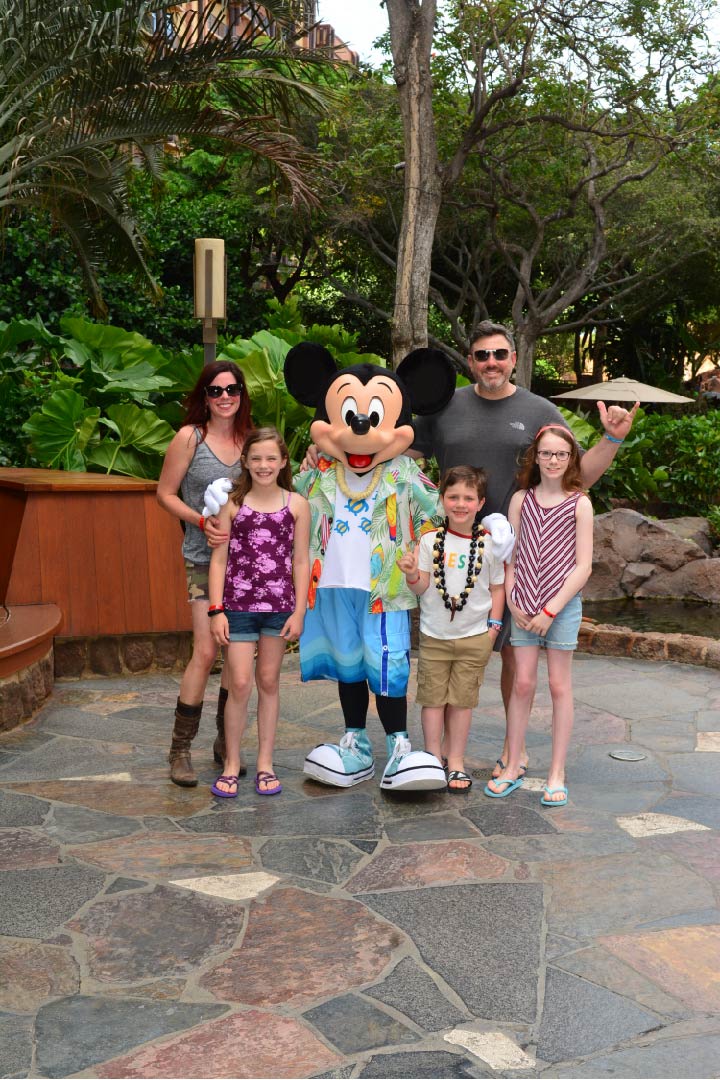 About a year later, the Ericksons were visited by two Make-A-Wish volunteers—“wish makers”—who came to their home to interview Gus, present him with his wish coin, and learn what his new-and-improved wish might be.  The Disney movie, Moana, had just been released and Gus. Was. Obsessed.  He loved the Maui character who had a magical hook which transformed him into creatures that could fly, creatures that could swim.  He loved how strong and fearless Moana was.  He loved to fish and wished to see the kinds of fish they don’t have in Minnesota lakes.  “I wish to go where Moana lives!”  And like that, Make-A-Wish Minnesota connected with Make-A-Wish Hawaii and plans to send the Erickson family of 5 to Disney’s Aulani Resort on the island of Oahu were set into motion…

The epic wish came true this past spring when Gus, along with his parents and two big sisters, packed their swimsuits and flip-flops and boarded a jet plane destined for “where Moana lives.”  Gus’ wish makers organized a Hawaiian-themed, surprise going-away party where he was met by grandparents, aunts, uncles, cousins… and PIZZA!  A fancy, stretch limousine escorted Gus’ family the next morning to the Minneapolis-St. Paul International Airport.  Upon landing in Honolulu, they were greeted by another Make-A-Wish representative who showered them with traditional orchid and kukui nut leis.  The moment they arrived Disney’s Aulani Resort, the whole family was welcomed with tropical refreshments, more leis, a personal letter to Gus from Mickey Mouse himself, and the most magical setting a kid could possibly imagine.  Make-A-Wish even treated Gus’ family to a day of snorkeling at Rainbow Reef and private, V.I.P. meet-and-greet with brave Moana, in the flesh.  Gregg and Becky recount the whole experience as being a true celebration; a healing escape—and reward—for a family who lives and breathes and works amid the reality and unpredictability of NF, every day.  (And… waaaay better than a piece of candy.) 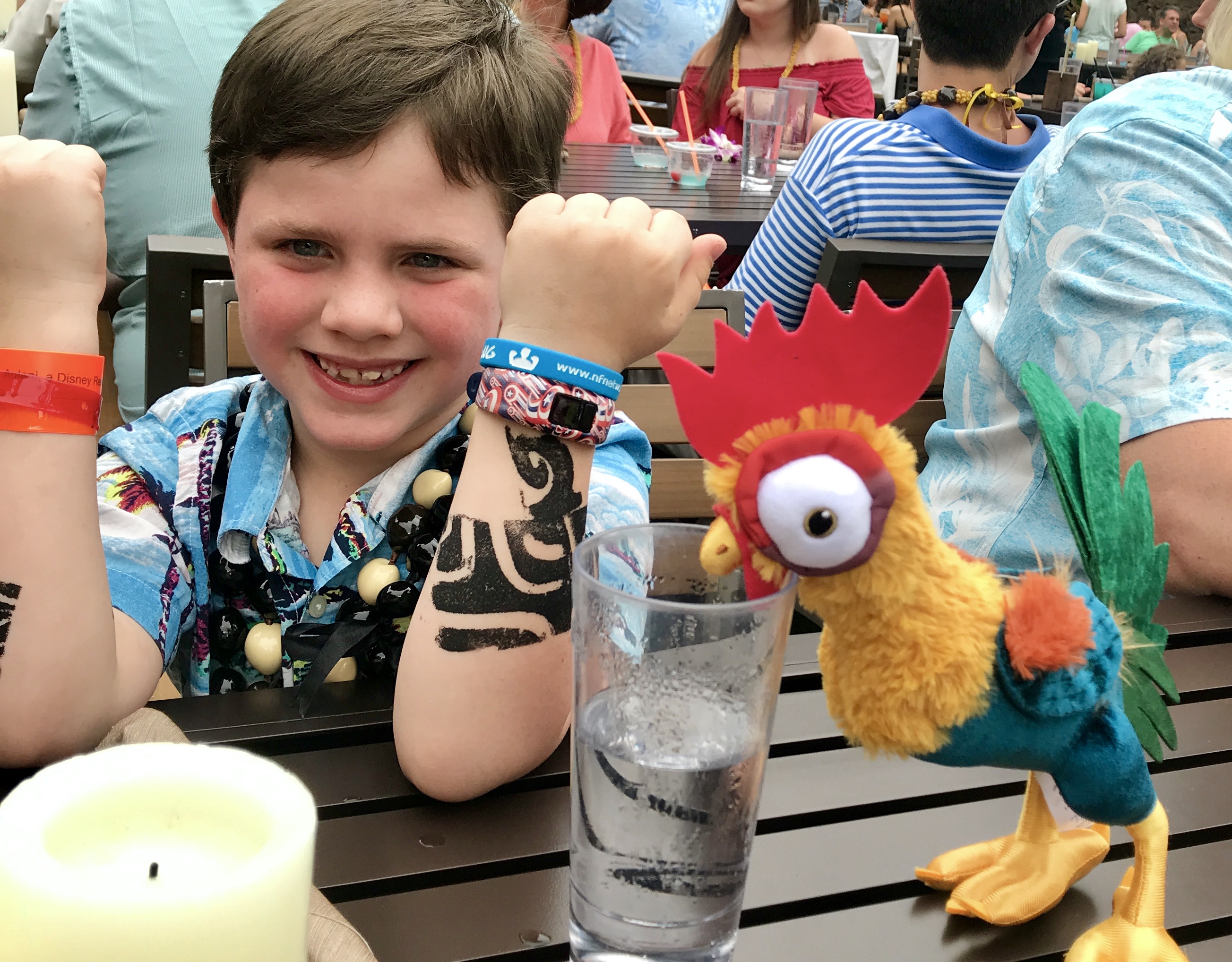 o learn more about the “wish granting” process, visit http://wish.org/about-us/making-a-difference/granting-wishes#sm.0001ri30xtlraei8zjg1ca6261udd, a page on the Make-A-Wish site called “How We Grant Wishes.”